Weddings after the state of alarm

More and more couples decide to say yes, despite the pandemic situation that we continue to experience. The lifting of the state of alarm and the good rate of vaccination give a break to the bridal sector, which returns to resume the celebrations with all the security measurements.

Are you getting married and have you decided to celebrate the wedding this year? Congratulations!! We tell you the details that you must take into account in this new situation.

Depending on the community in which you live, the measures on the number of attendees at events can vary, from 500 people outdoors and 300 indoors that Andalusia allows, up to 100 people outdoors and 50 indoors who can meet in Murcia. However, these numbers may vary depending on how the virus is evolving, that is why it is important that you inform yourself in the catering of the allowed attendees at the time of your celebration.

To see first-hand how all these changes have influenced the bridal sector, Bodas.net has conducted a survey of more than 1,700 users with a planned wedding date between May 2021 and April 2022. And the results could not be more encouraging, since 8 out of 10 couples affirm that they will marry in 2021.

“Although the trend so far has placed the "month of September" as the one chosen by a large majority of Spanish couples to say “yes, I do” "followed, respectively, by June and July - as stated in the Essential Wedding Book signed by Bodas.net, Carles Torrecilla (ESADE professor) and Google–, the new trend is a bit different. Thus, the period in which there will be more weddings will be from June to August, when 43% of the total of the links planned for 2021 will be held. The second largest period will be from September to November with 31% of the weddings. And 8% will exchange alliances during the month of May."

Safety and hygiene measurements are here to stay and are already part of the details to take into account when organizing a wedding. The first is the wearing of a mask, since at this time it is mandatory. The following measurements that most concern the bride and groom, according to the survey conducted by Bodas.net, are:

“72% will supply antiseptic gel to everyone present.

43% will organize the banquet outdoors.

26% will modify the traditional dance or final party.

11% will ask the guests to take a Covid19 test before the wedding or to prove their vaccination. Even 31% of these couples will ask their family and friends to show them a test of their negative Covid19 test." 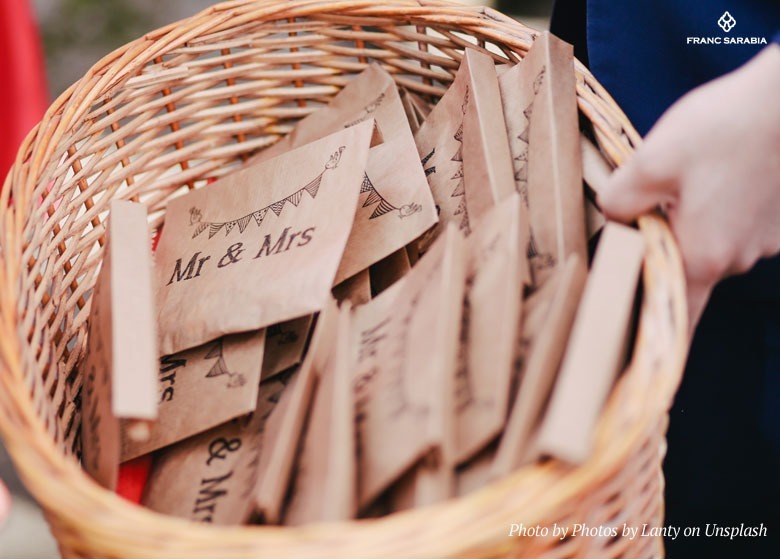 The really important thing is that you celebrate your love, that you say yes surrounded by your loved ones and that you can enjoy the big day in a responsible way.

All the brides who during the pandemic decided to paralyze their wedding plans, little by little are reactivating them and the first question that arises is whether their dress will be in time for the new date. We recommend that you contact the Franc Sarabia store where you have ordered your wedding dress and our colleagues will help you to resume the process so that everything is ready for the big day.

If you have not yet found the dress of your dreams, make an appointment at your nearest Franc Sarabia store and we will make it come true.